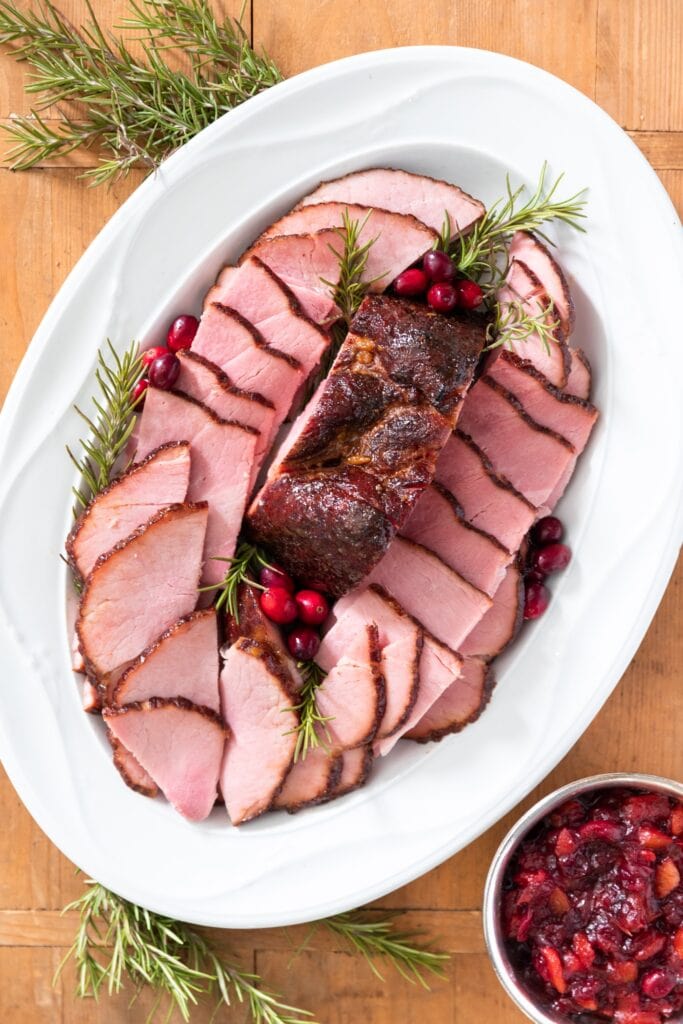 This glazed ham is a super simple, yet impressive main dish to serve during the holiday season! When paired with a cranberry chutney, the combination is amazing!

Ham may be one of the most nostalgic main dishes at special occasion meals. A good ham should be simple, but oftentimes, it seems like they can end up dry, tough, and lacking in flavor, other than strong, smoky notes. I love a good ham and find that they make preparing a main dish a breeze when prepared correctly. The underlying flavor from the curing process is already there, so all a ham needs is a little attention for a showing stopping meal!

Traditionally, hams are cured and smoked or baked to fully cook them. When you purchase a cured ham, the meat is ready to eat and simply needs to be warmed up to 140°F before serving. Oftentimes, this is the benefit of ham: there’s virtually no guesswork that needs to go into the preparation.

I used to have visions of slicing meat at the table, with guests oohing and ahhing at the beauty of it all. Even though it looks good in a painting, I don’t think Norman Rockwell ever sliced meat in front of his guests. If so, he would have known that it never ends up looking graceful. But say hello to the spiral cut! With a spiral cut ham, the meat is presliced, making it quicker and easier to cut once baked.

Hams can be served as is without alterations. But at Christmas and special occasions, I love to glaze a ham. What could be better than a mixture of sweet, salty, and sour flavors to complement the smoky ham? Plus, the strong flavors of ham can stand up to some added spice.

Ham’s strong flavors need an equally strong-flavored glaze to be noticed. Most glazes go heavy on brown sugar, which adds a good sweetness, but doesn’t actually add much flavor. Instead, I start with butter and maple syrup. Both add a rich flavor along with some sweetness from the maple.

To ensure there isn’t too much sweetness, I like to add in Dijon mustard. This provides just the right about of tanginess without tarnishing the desired sweetness. Finally, to make it more seasonal, cinnamon and cloves add the warmth of spice.

Large celebratory meals often become heavy, with flavors that drown each other out. This is exactly when I crave something acidic to wake everything up and provide excitement. For this ham, I love to serve it paired with a cranberry chutney as a sauce. Fresh cranberries, dried apricots, pear, and spices are simmered together to create a perfect side to the ham. There’s a reason we serve cranberry sauce with turkey and I’m convinced this chutney is even better with ham!

As a main dish, this glazed ham is festive, easy, and delicious! Try it out this Christmas and let me know what you think!

Watch how to make this glazed ham recipe: 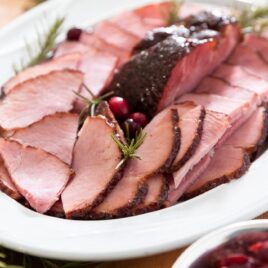 For the cranberry chutney 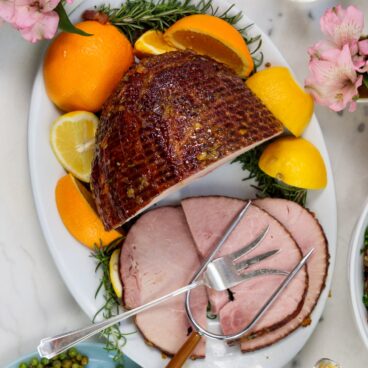