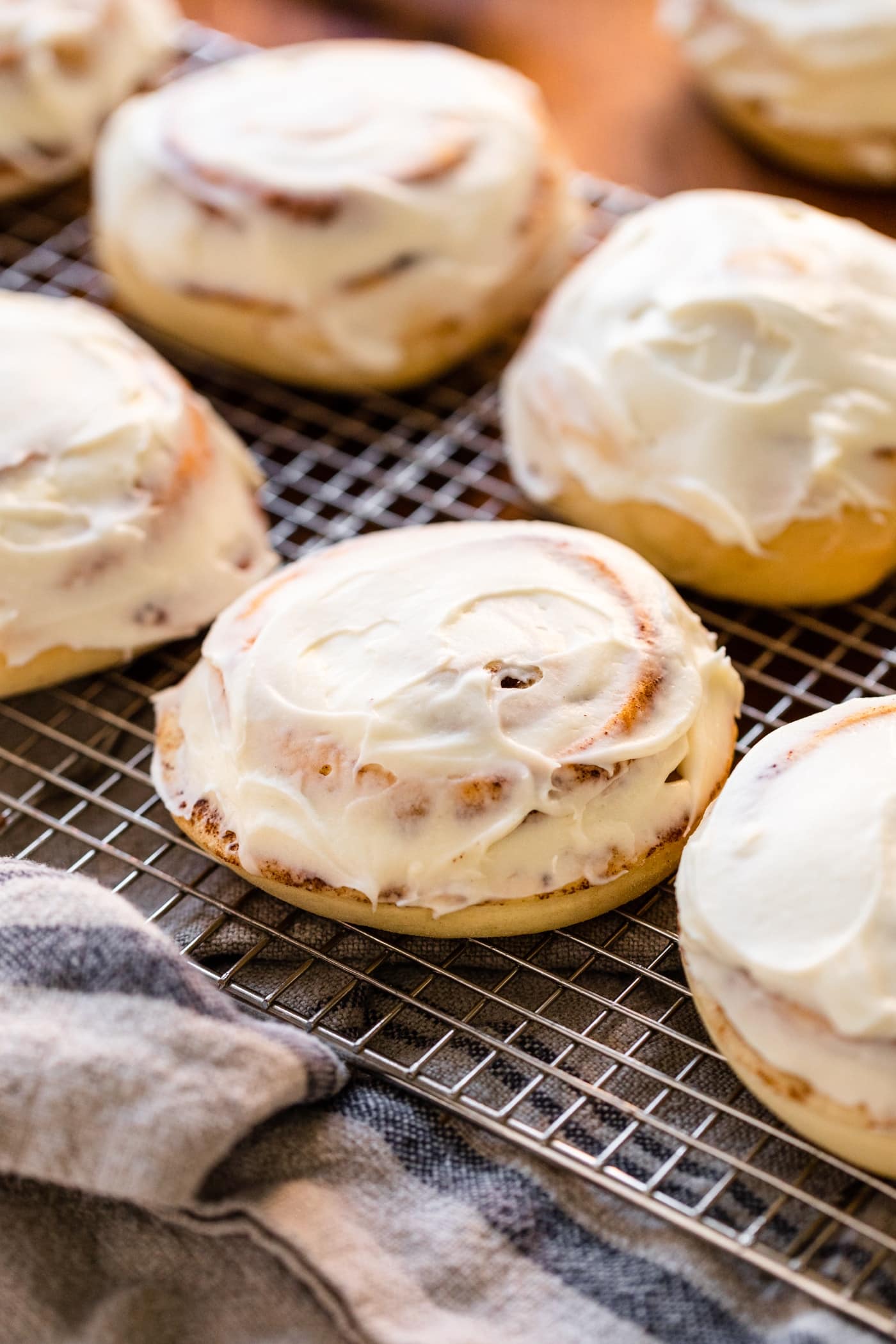 The holy grail of baking is cinnamon rolls. If you, your family, your grandma, or anyone you know grew up in the Midwest, you know about cinnamon rolls. Everyone I talk to has their own version of what the ultimate cinnamon roll should be:

This is high stakes, people! Super important stuff! This ultimate cinnamon roll recipe is my mom’s, given to her by her mother. Grandma adapted different recipes to form what she thought – and numerous others agreed – were the best rolls. All the credit goes to her.

These are not super gooey, but instead soft-textured and fluffy. Exactly what I crave! You’ll love them too!

In most cinnamon roll recipes, the process is relatively the same:

Cinnamon roll dough can have a lot of variations. And if you do a simple Google search for cinnamon rolls, you’ll find that’s a gross understatement.

Here are a few things that I’ve found make for the perfect cinnamon roll:

So why is there so much emphasis on the dough? Well, because it’s the key to the perfect cinnamon roll!

There are two main things I don’t do with my dough:

Make sure not to give in to the temptation to use too much flour or overwork the dough. As the mixer is working (or you’re kneading – totally old school!), you may become impatient and think the dough seems sticky. Your thought may be to add in more dough and mix it for longer. But if you keep adding in flour and work the dough past a smooth, elastic consistency, you could end up with a coarse, dry dough.

Grandma would always say her mother told her to listen to the dough. I know, it seems far fetched. But her theory was that as you it, it will tell you when it’s ready. To be honest, this kind of works! When the dough has a soft, slightly sticking sound but is smooth, it’s ready. Just use those ears!

The frosting is really just a way to gild the lily. Cinnamon rolls are good but the frosting takes them over the top. If it were always up to me to choose the perfect frosting, I’d go with brown butter or caramel frosting. My cinnamon roll muffin recipe uses a brown butter icing that I could eat by the spoonful, all by itself.

Personal preference aside, the most iconic way to frost these rolls up is with a cream cheese frosting. I don’t usually stray from what I grew up with, but here I am livin’ on the wild side. ? Who doesn’t love a cream cheese frosting? A slightly tangy, sweet, thick, and creamy frosting is always a smart choice.

What makes this the ultimate cinnamon roll?! Well, it’s a versatile dough that can be used to make either the traditional style roll or… (drumroll please)… a sticky caramel variety.

Growing up, we knew it was a special occasion when mom took Grandma’s recipe and made them into sticky caramel rolls. Looking at them, you’d think these are difficult to make but honestly, they’re surprisingly easy.

While the dough is making its first rise, make a quick caramel. No, this isn’t a caramel where you have to watch the temperature and worry about it burning. If you’re interested, I do have a homemade caramel recipe that does require you to be a bit more alert.

Throw all the ingredients together and after a few minutes, pour it into greased baking dishes. To finish, sprinkle toasted pecans over the top.

Once the pans are filled, place the unbaked, one-time risen cinnamon rolls on top. Let them do their final rise and then bake them up.

They look inconspicuous but when they’re cool, invert them onto a plate and you’ll be looking at gooey, caramel-topped cinnamon rolls.

Watch how to make these ultimate cinnamon rolls: 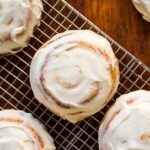 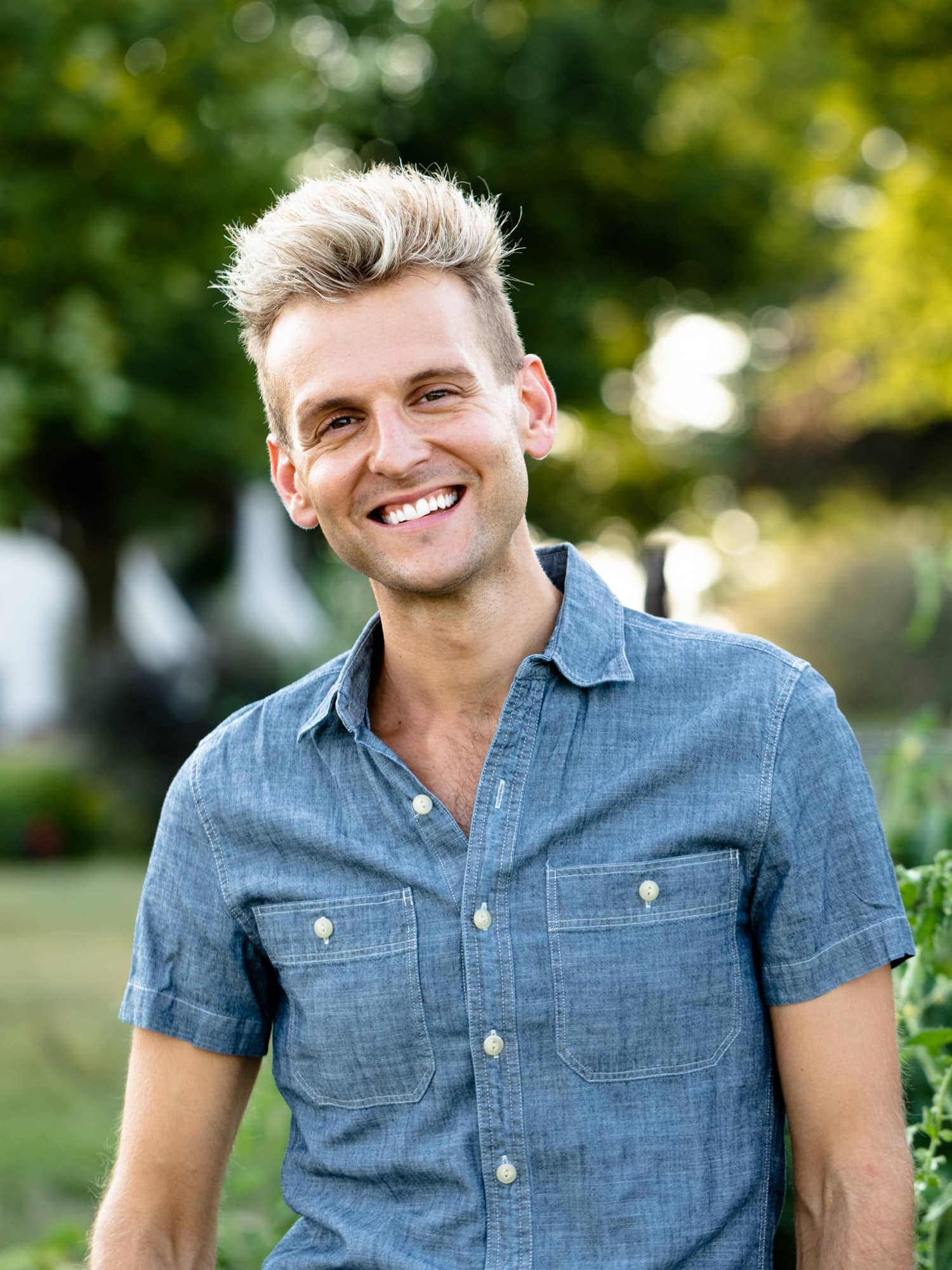